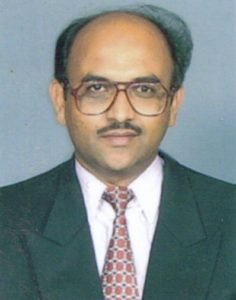 A dynamic personality who has left no stone unturned in the field of Pharmacy. He has completed his Diploma in Pharmacy, from Board of Tech. Edu. (M.S.). He has done his graduation, (B.Pharm) from Govt. College of Pharmacy, Karad (1981) under Shivaji University. He has completed his M. Pharm. (1983) from Nagpur University with specialization in Pharmacognosy. He had been honored his Ph.D. in Pharmacognosy from University of Pune with specialization in AYURVEDIC PHARMACY AND PHARMACOGNOSY.

He has more than 35 years of teaching experience. He was engaged in teaching as an Assistant Professor for 21 years to B.Pharm students & 18 years to M.Pharm students at Bharati Vidyapeeth’s Poona College of Pharmacy, Pune.

He guided 19 M.Pharm and 02 Ph.D students for their Research. He is the first approved teacher of Poona University and Bharati Vidyapeeth in his subject. He has been elected as a member of board of studies (BOS) for the subject Pharmacognosy in Pune University. It´s his 4thtime achievement as BOS. He is also Co-opted member of BOS in Shivaji University, Kolhapur University and North Maharashtra University. He has also teaching experience of Medico Botany& Advance Diploma in Technical & Analytical Chemistry. He has worked with the Sponsored Research activities of Hygienic Research Institute, Bombay.

After taking voluntary retirement from Bharati Vidyapeeth’s Poona College of Pharmacy in Dec.2004 he joined as a Principal at CAYMET’s Siddhant College of Pharmacy, Sudumbare, Pune. In 2006, he joined as Principal at JSPM’ s Rajarshi Shahu College of Pharmacy and Research. He has published 50 research papers in Scientific Journals and presented 33 papers in national & international conferences. He has under his credit published 07 books on Pharmacy subjects which are referred nationally & internationally. He has attended various training programmes, Seminars, Conferences, Symposia, and Workshops held in various places.

Principal Dr.K.R.Khandelwal, was a Co-ordinator of Local Organizing Committee and Chairman of Hospitality and Catering Committee of the 19th Annual National Convention of Association of Pharmaceutical Teachers of India [APTI -2014] which has been held during 28th – 30th (Friday-Sunday) November. 2014 at Shree Shiv Chhatrapati Sports Complex Balewadi, Pune, Maharashtra. The APTI is a National Conference organized by Pharmacy Institutions, Pune  Region (Maharashtra State Branch).

Dr.K.R.Khandelwal was also felicitated for the efforts taken for the success of 8th International Conference by Society for Ethnopharmacology, India. ( SFEC 2021).